Getting to Church with children in tow is a challenge, but sometimes the

This is what happens when Mom tells the boys that the honey needs a lid: 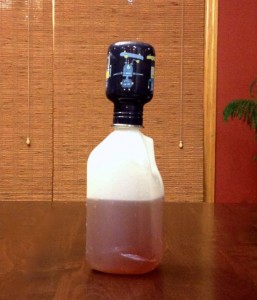 Dominic (most matter-of-factly, sitting at the dinner table): Sarah, when I marry you, I will give you part of my gum I got from the dentist.

I just love how transparent three year olds are! They just completely don’t realize how much they completely give away their secret, mischievous plans.This story comes from just a few weeks before Daniel was allowed to stop taking naps (because he couldn’t get to sleep at night).

Landon’s iPod touch usually lives on his bedroom clock where it can charge and play music, but this had to change when we discovered Daniel playing with it under the covers of his bed. He was supposed to be napping, but decided games on the iPod sounded like a better idea.

The next day I took him to his bed for a nap,  and we went through our usual routine: read a book, get a drink, and say “I love you”. When I finally tucked him under his blankets, he sat up with a start. “Hey, where’s Landon’s iPod?” he asked.

“Oh, he put it in a hiding spot,” I replied casually.

“Where?” He glanced about the room anxiously.

Crestfallen, he allowed me to re-tuck him into bed and kiss him on the cheek. He pulled the blankets up to his chin and turned over sighing, “I do wish Landon’s iPod was here.”

I was in the process of working on some school, when I heard Daniel’s voice coming from the kitchen. “Pumpkin,” (he calls me pumpkin), “will you come out here and drink some tea with me?”

“But Pumpkin,” he protested. “If you don’t come, you will take my sunshine away!”

I’ve always known my little brother Dominic was the most adorable baby ever, and now the fact has been verified by the largest newspaper in the city. Not every baby has his picture in the paper for Ash Wednesday two years in a row!

I was standing in the back of the church before mass, holding Dominic in my arms. We had to be there a half hour before mass began since Johnathan and Landon were altar servers. So, Mom sent me to the back to entertain the baby till mass began. While I was back there, I became aware of a woman pointing a very large camera in my direction and clicking away. I shot her a sideways glance, then I took a few steps forward, bouncing Dominic up and down in my arms. The camera followed me. I took a few steps forward. The camera moved with me. Shortly, the photographer approached me and asked for both of our names.

Here’s the picture that appeared in the paper this morning, taken just after Dominic and I received our ashes: 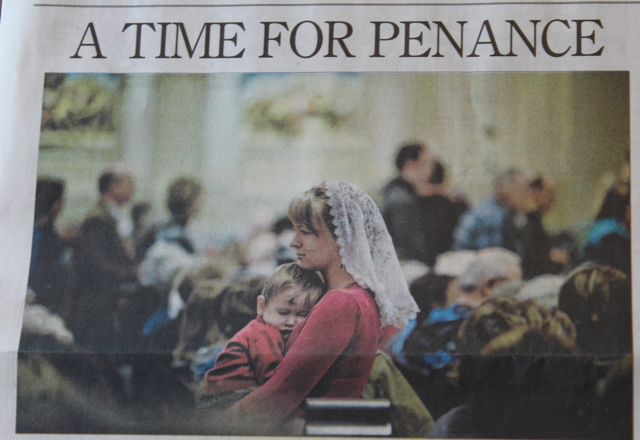 Now for the funny part: the caption under the picture reads: “Sarah carries son Dominic, 22 months, back to their seat Wednesday during the Lent Mass at St. Joseph’s Cathedral.” 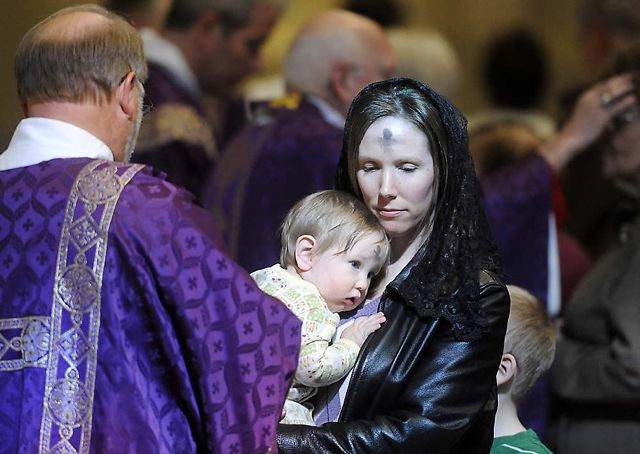 Daniel has been being a true two year old for the past few weekss. From trying to pour his own milk (thank goodness the jug was almost empty!) to drawing in school books, he has found  one hundred and one ways to get into things. Here is one of his latest tricks: 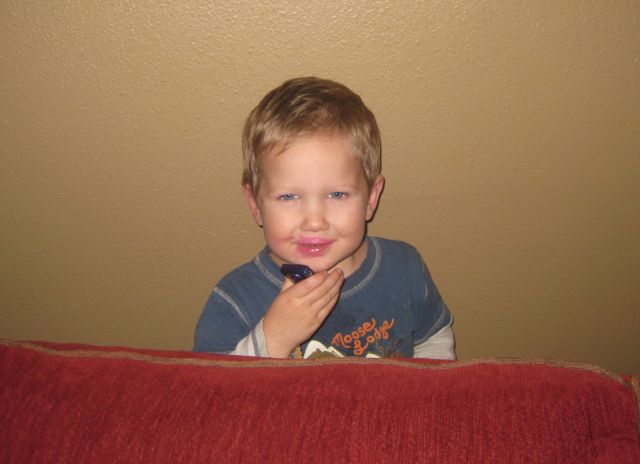 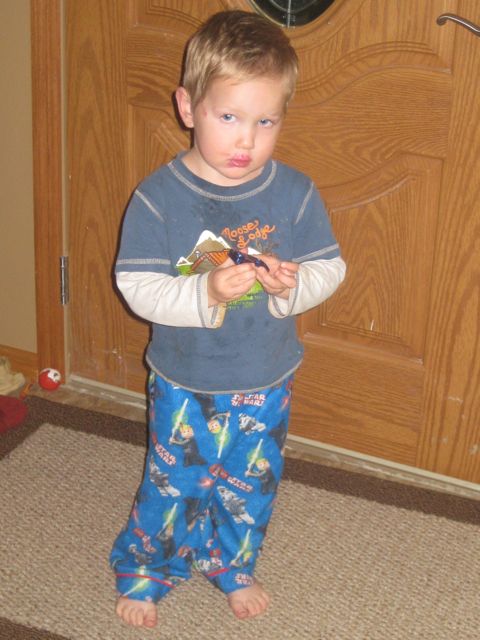 Am I in trouble?

Mom: Joseph, if you don’t get in bed, I’m going to make you change your jammies!

(They were his favorite Toy Story jammies and you could smell them from three feet away!) 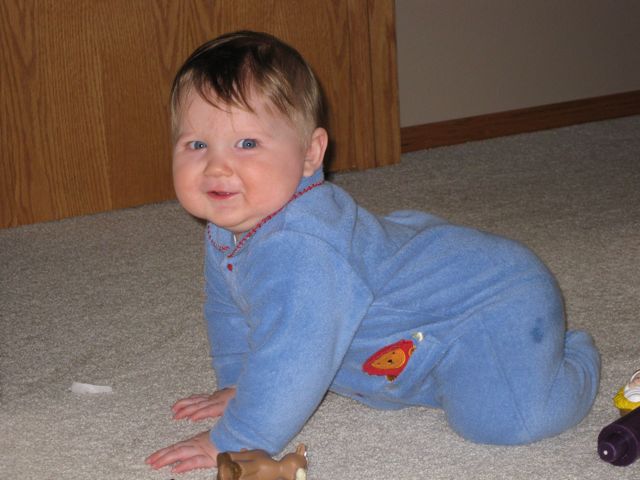 Alexander: “Mom I need to go to the doctor.”

Alexander: “Because I just coughed.”

Mom: “I don’t think a cough isn’t enough to go to the doctor.”

Mom: “Really?  I haven’t heard you complain about it.”

Alexander (grimacing and putting his hand to his throat): “OW!”

Methinks this could be solved by only offering the foul tasting cod liver oil.

The boys are having a hard time adjusting to the colder weather. Mom: “Do you want me to get you a shirt? You are going to be cold.”

(While Alexander and his friend are building things with legos) Alexander: “Oh, that’s a cool ship!”

Alex: “Dad, I was going to give you a dandelion for your birthday, but I accidentally ran over it with my John Deere bike.”