The socialization scene replayed constantly my first month at school. At times this became somewhat repetitive, and I was discouraged to find how deeply this stereotype was still rooted in the academic world, but I believe this ended up as a positive part of my first days as a college student. While frequently conversations don’t go much farther than “what’s your major?” and “where are you from?”, I got to know quite a few people that I wouldn’t have otherwise when they asked about my high school and the conversation took a drastic turn.

Faculty at the college were very concerned about my ability to socialize. Early in the semester, doted on the freshmen, asking the routine questions: hometown inquiries, dorm room conditions, etc. When they learned that not only had I been homeschooled, but was still living at home, their faces displayed surprise and concern. They were sure I must be entirely socially incompetent! I could often allay their fears by telling them I had made a few friends and joined both choir and attended meetings run by the student nursing association. As we parted, though, I could still sense apprehension in their voices.

Ironically, these same staff seem to not have noticed the crippled social skills of many of the other students. They would only have to peek their heads into a classroom on the first day of class, or visit a student get-together to see that something is dreadfully wrong. Times and places that should be filled with introductions and conversations have been transformed. Students have traded actual face to face interactions for the virtual world of texting and Facebook.

This has been my greatest impediment to finding new friends at school, and other students in my class over and over again. For example, at a post-choir practice party, I wanted to get to know girls I see every day at rehearsal but haven’t formally met. It was hard to find someone to introduce myself to, however, since over half the choir plopped down with their cell phones and texted. It was a very quiet ‘party’.

Lest I sound like an anti-progress ranter, I must state that I use texting frequently. It is a great way to send a quick note to a friend you might not have otherwise called, or for Mom to ask me to pick up groceries without interrupting homework. A line has been crossed when it’s acceptable to have a conversation while holding your phone in your hand and glancing at it in between sentences. 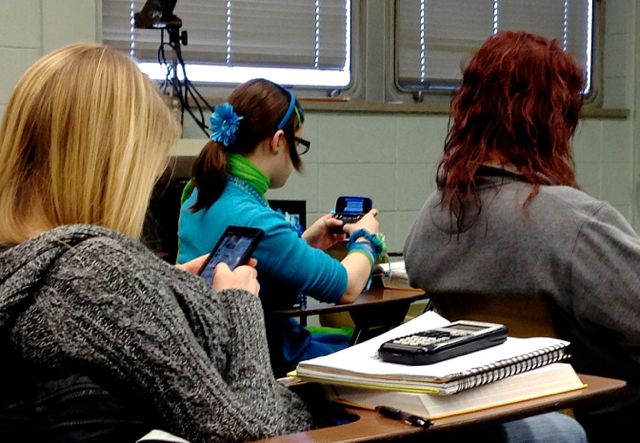 ‘socialization’ during a break in class